By: David M. Carollo
A Pilgrimage of hope and renewal.

In 1971, The Temptations released a song entitled Ball of Confusion. It, of course, referred to the world as it was then. Although not written in light of the Faith, it acknowledged that something was not right in our world and that we were spiraling out of control. Fifty-four years earlier in 1917, Our Lady had appeared at Fatima, Portugal and warned of many difficulties that would define our future if we did not convert and return to living in accord with the laws of God.

Sister Lucia, the longest surviving seer, who was told that she would be here on earth “a while longer” than her two fellow seers to make Our Lady known and loved, watched history unfold.  She knew that the solution to our problems was there if only mankind would humble itself enough, as did the children who were given this monumental message of warning and hope. “If my requests are not heeded, Russia will spread its errors throughout the world, causing wars and persecution of the church. The Holy Father will have much to suffer,” Mary said. The history of the last 102 years speaks for itself and the ball of confusion mentioned in the song has become a reality.

In 1947, Sister Lucia met with the co-founder of The Blue Army, Mr. John Haffert, and heard of his plan for an organization dedicated to bringing the message of Fatima to the world. It was a message of conversion and hope, and she expressed to him the need for those who would embark on this expedition to be holy. The Blue Army pledge, which she helped him formulate, contained the essential call of Fatima – to offer up one’s daily sufferings, to pray the Rosary every day and to consecrate oneself to the Immaculate Heart and wear the brown scapular as a sign of that entrustment. Later, the Five First Saturday devotion was added. The Pledge essentially called for an army of people seeking holiness to go out and renew the world through the devotion to the Immaculate Heart. The storied International Pilgrim Virgin Statue was commissioned and became the symbol of this great mission of Fatima.

For 72 years now, this miraculous image has been bringing this message to a world in need. The sign in front of the image states, “Do not touch her, she will touch you.”  Our Lady touches hearts and leads us to her Son. Throughout this time the pilgrim virgin and the apostolate that she represents have drawn incredible numbers to her heart, promoting personal holiness through prayer and reparation.

The history and the mission of the Church has been to evangelize and bring souls to God. “Go and make disciples of all nations,” Our Lord told the apostles. The work of St. Junipero Serra and other Spanish missionaries and the establishment of the California missions is in accord with this charge. One only needs to ponder the names of the settlements to realize the Catholic heritage of the area, from San Diego to San Francisco and beyond.

The mission of our apostolate and particularly of the Pilgrim Virgin Statue program is to help renew the Faith in places throughout the country and the world, which have lost the direction set forth by these early missionaries.

The Fatima message is a message of renewal. It is a message with warnings of the consequences of continuing on the course of self-direction as opposed to the course directed by the Word of God. It is most importantly a message of hope.  The missionaries wished to help people avoid the pains of eternal loss of God, but even more ardently they wanted to teach of the joys of serving God and the rewards which accompany that union.  Our Lady comes to us at Fatima to not only warn us of our errant ways, but to reinforce the understanding that loving and serving God brings about joy that we cannot comprehend. A true understanding of this joy can only lead to a rejection of sin. With God there is serenity and love; away from Him there is hatred and chaos.

The lyrics of the song says it all, “Fear in the air, tension everywhere… Round and round and round we go, where the world’s headed nobody knows.”

We do know where the world is headed, but we also know where it can go if only we turn to God through the direction of Our Lady. Mary promised the triumph of her Immaculate Heart and an era of true peace. “In the end my Immaculate will triumph” she said.  The spirit of the missionaries who devoted their lives to establishing the Faith in this new land must also define us as we strive to renew the zeal of the faithful in these difficult and indifferent times.

As the World Apostolate of Fatima/ Our Lady’s Blue Army embarks on the Portolá 250 tour of the California missions in association with Catholic Gift Foundation, Catholic Action for Faith and Family and the Knights of Columbus, we ask Our Lady, St. Junipero Serra, and the many unknown saints who worked to establish these places of prayer to enkindle in hearts the joy of living in His grace.

David is a regular guest on EWTN television, appearing on such shows as Sunday Night Prime, The Church Universal, At Home with Jim and Joy, and Vaticano from Rome. He is heard on several radio shows on Radio Maria and Relevant Radio, The Winds of Change show in Chicago; as well as other stations throughout the United States discussing the Fatima message and the Catholic Faith. 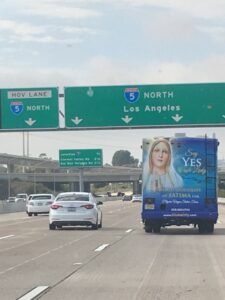